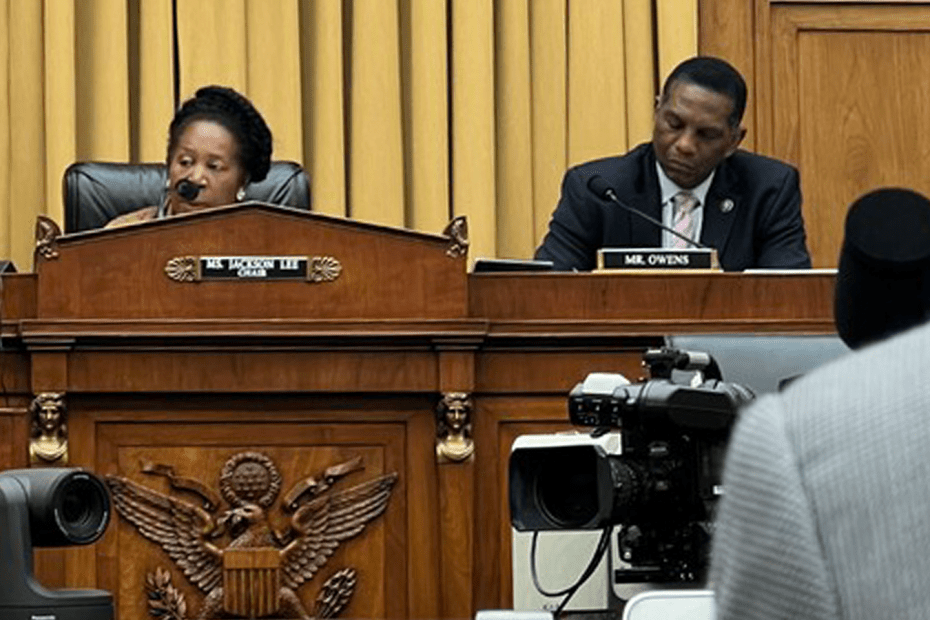 I had no official role in this hearing. Rather, I had the good fortune to be invited in support of our 2A rights.
by Dianna Muller, who runs the DC Project.

Have you ever witnessed something you knew was so wrong on so many levels, and been unable to speak out?

That’s exactly what I experienced last week as I sat through a congressional hearing that was pitched as a bi-partisan attempt to address gun violence. This hearing was run by Rep. Sheila Jackson Lee, D-Houston, who is the chair of the House Judiciary Committee’s subcommittee on Crime, Terrorism, and Homeland Security.

I had no official role in this hearing. Rather, I had the good fortune to be invited in support of our 2A rights, by Dianna Muller, who runs the DC Project. We sat together in support of expert witness John Lott, one of the two witnesses defending our 2A constitutional rights, up against three times as many witnesses in opposition of preserving those constitutional rights as they stand at the moment.

My opinions here are my own, and do not represent any organization, entity, or elected representative.

I am not going to pretend I am a firearms expert. Far from it, in fact. Although I intend to change that. What I am, however, is a concerned citizen of this beautiful country who has given less than many but more than most, to the cause of freedom in America. I am also someone who has been through and come out the other side of a media and political gauntlet that rips open deeply personal pain in the guise of justice, courage, and caring, when in fact I was simply a pawn in personal, professional, or political pursuits.

THAT is my area of expertise – the personal cost of freedom, and the personal toll it takes to revisit the most agonizing memories, by opening that Pandora’s Box of Pain. As such I can unequivocally state that every Democrat in attendance on that panel that day, and every witness who sat alongside the courageous young women who were and remain so deeply impacted by the school shootings in Uvalde and Sandy Hook, while their family members sat stoically behind them, should be gravely ashamed of themselves.

We begin with Ms. Jackson Lee, who was the head ringmaster of this circus.

Ms. Lee thought it was important for the sound of gunfire to ring out as the opening act. So she blared about two minutes of that audio without any introduction. She then explained her reasoning, before launching into her allotted time which she used to announce the witnesses, with particular emphasis on Faith Mata, whose little sister Tess was killed in Uvalde, and Nicole, who is a survivor of the Sandy Hook shooting. She then reminded everyone of the pain and suffering caused in Uvalde, in particular, before painting the GOP as a party of uncaring barbarians.

Maybe these witnesses and their family members in attendance were not impacted by the gratuitous gunfire audio. I can’t speak for them. But even if they withstood that, what came next would pierce the thickest armor: graphic testimony from an Uvalde pediatrician as to the “mutilated” (Ms. Lee’s word) bodies of the children, a recording of children screaming, and pointed questioning about the specifics of what their pain was and is.

Then there was the rest of the show:

Testimony from one of the survivors included heartfelt but misstated facts, according to some experts. But unlike the circus ringmaster and her circus clowns, the GOP representatives in attendance that day respected the pain and courage of the survivors who were witnesses and did not press on that.

Congressman Jerry Nadler ran his own act, blatantly misquoting Mr. Lott’s testimony while questioning another witness, and referencing Mr Lott’s testimony as “idiotic.” Fortunately, Rep Greg Steube (R-Fla.) pounced on that, and if Rep Nadler had a drop of self-awareness, he would have been embarrassed by Steube’s skilled unwrapping of Nadler’s own idiocy.

Somewhere towards the end of the circus, Doctor Ray Guerrero felt it was somehow relevant to note that he is a proud gay man. It’s unclear what that has to do with the Uvalde shooting or this hearing, but then again, I am not an expert on gun violence.

Some facts did seem relevant, such as the fact that, according to Mr. Lott, mass shooting manifestos often, if not always, as I cannot remember which he said, include the fact that these shooters intentionally select gun free zones as their twisted playgrounds.

That seems noteworthy, doesn’t it?

One can understand the skepticism with which witness in defense of the 2A Jack Brewer’s testimony was met. It is difficult to fully convey the impact of fatherless families in just a few moments of testimony without triggering solo moms. I know this because I raised four kids without my husband, after he was murdered by a fellow soldier in Iraq. And I definitely feel defensive about the fact that my kids have grown into young adults who would never imagine murdering another human being. That being said, after years of healing and personal growth, as well as some inescapable evidence, I recognize the ways my kids’ lives and paths have been negatively impacted by not having a strong male leader in their lives. It is therefore not such a large leap for me to acknowledge how that absence, when blended with a host of other circumstances, contributes to crime.

As expected, the Democrats on the committee used that testimony to paint the GOP as blaming hard working and courageous single moms for mass shootings.

Those are just some of the highlights.

The mockery of this hearing was not only discouraging as a tax-paying, patriotic American, but was an outrage in terms of how it used real people with real loss and pain as its pawns.

My heart goes out to all survivors of mass shootings and all victims of violence. And yet, even after sitting in the room with some of these strong people, hearing their pain, and knowing firsthand what that pain does to a person, I cannot justify the restriction of our 2A, constitutionally protected rights.

My husband and so many others gave their lives in service of this country and the Constitution is is founded upon. No one- no matter what office he or she holds, is above it. And no one has a right to decide for others, how much of that Constitution we get to keep.

The Constitution was not created or earned by politicians, lobbyists, or corporations. It was instead created, earned, and defended by people like my husband and all who serve honorably in our United States military.

Sitting in that room, watching and listening as elected representatives took very real pain and suffering, twisted it, exploited it, and used real people as their pawns to further remove our rights was disgusting. It was a slap in the face of my husband’s sacrifice and our family’s pain as much as it was a gratuitous, grandstanding foreshadowing of what this country might look like, if the people who have such disdain for our Constitution are left unchecked.

It’s been a busy week, but this remains on my heart. While we are all wrapped up in our own responsibilities, and the holidays, and the headlines, the dangerous march to remove our rights continues. hashtag#constitution hashtag#congress hashtag#gunviolence hashtag#secondamendment hashtag#patriotism