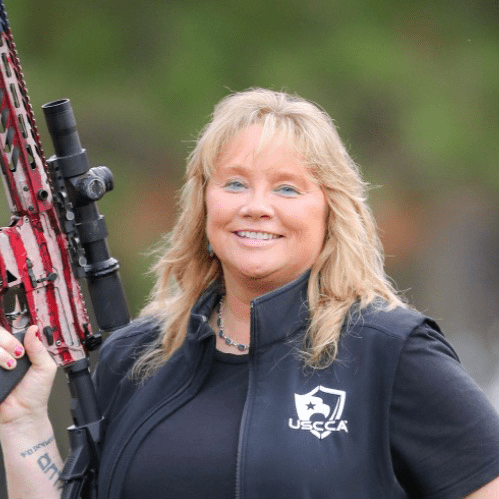 Donna Anthony is a veteran of law enforcement and was injured in the line of duty. With over 20 years of law enforcement and security experience, she was a duly sworn Police Officer in Alaska, prior to which she was a Deputy Sheriff in Ohio. During her time as an officer she was a Field Training Officer (FTO) School Resource Officer (NASRO) on the Suspicious Active Report Task Force Team (SARS) and an Investigator assigned to the Alaska State Trooper Statewide Drug Task Force Unit for 6 years in an undercover capacity. She served as a case officer in several State and Federal cases. She has also worked throughout Alaska with many law enforcement agencies including the military, U.S. Marshals, DEA, ATF, and FBI.

Since her injury Donna started a company called Point Blank Firearms & Self Defense Training and travels nationally teaching. She is a Certified NRA Firearms Instructor, a Firearms Training Counselor for USCCA, a Front Sight Instructor since 2014 and a Rangemaster with the National Law Enforcement Firearms Instructors Association.

Donna has also been a guest lecturer and has filmed Active Shooter in the Workplace and Two Tactical Tuesdays for the United State Carry Concealed Association. In addition, she has been a guest speaker for The Well Armed Woman Shooting Chapters and had done Podcast video interviews with Alex LansherAnatomy of a Warrior, with Out of Order with James Keleda-Active Shooter Response and Armed Society Podcast-How woman train other woman.

In 2013, Donna brought to Alaska The Well Armed Woman Chapter (TWAW). TWAW Shooting Chapters is a national 501(c)3 non-profit organization with the mission to educate, equip and empower women shooters. With currently over 356 chapters in 50 states women are the largest growing demographic of new shooters and firearm owners. TWAW shooting chapters provide opportunities for women shooters to gather, practice and grow as women shooters. TWAW provides a safe and welcoming environment for training and development for female shooters with other like minded women. In 2015, Donna became a board member for The Well Armed Woman Shooting Chapters. In 2017, she became the National Training Coordinator for the TWAW in all 50 states. In 2018, Donna joined the DC Project and later became the State Director for Alaska, which is a nonpartisan initiative to bring 50 women, one from each state, to Washington with a particular focus on making sure lawmakers hear the perspective of female gun owners.